A comfortable and cheap option to travel in Spain is by train. The main station in central Madrid is »Atocha RENFE«. Here operate the high-speed trains

to Seville (AVE 2h), Córdoba (TALGO 2h), Málaga (AVE 2h) and the normal intercity trains. In general, Átocha is the connection into the south of Spain. Who wants to visit the north of Spain, start its journey from the station »Chamartín RENFE«. This station is located in Madrid's north and connects Madrid among others with Barcelona and destinations in France. The prices range from around 70 € for a return journey to Barcelona and about 115 € to Seville. The prices may vary widely depending on the season and the day.
For the nearer excursion destinations the commuter trains (Cercanías) are ready.

The Cercanías trains of the state railway company Renfe comply with urban rails in the UK. Their stations are marked with a tilted C on a red background. The MetroBus tickets are also valid for the Cercanías. In the stations of the Cercanías also vending machines can be found where you can buy tickets for the individual routes.
If you want to go fast from the north to the south of Madrid, one should take the Cercanías, which is about twice as fast as if you take the metro.

Central Station. Trains from Portugal, South of Spain, the departure of the AVE and the Cercanías (commuter trains)

Trains to the suburbs 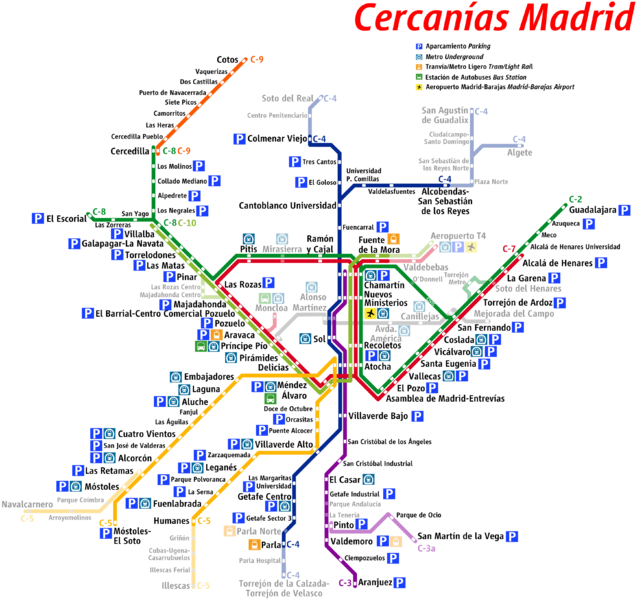